Century by Century – the Chronology of Knitting Needle

Basic knitting is so simple – “two sticks and a string”. It seems like it could have been the first way to make fabric. In fact, knitting is quite a late invention in the arena of needlework; but its simplicity of action means that it has always been easy to learn and to transport. Even today it seems to enjoy far wider participation as a leisure craft than many erstwhile competitors such as embroidery, tatting, crochet or lace making.

Below is a brief history of the development of knitting needles and tools.

Two-needle knitting was developed in the Middle East, then the centre for technological innovation, from earlier single-needle or hooked tools.

A technology innovation – use of four or five needles – allowed knitters to knit in the round – perfect for hose, caps, and mittens or gloves. Several late Middle Ages paintings, known as the “knitting Madonnas” depict this new technology. 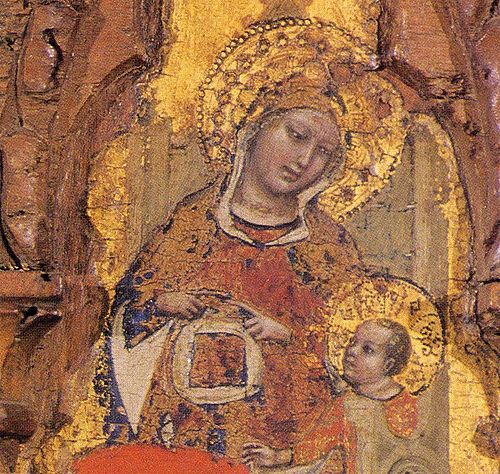 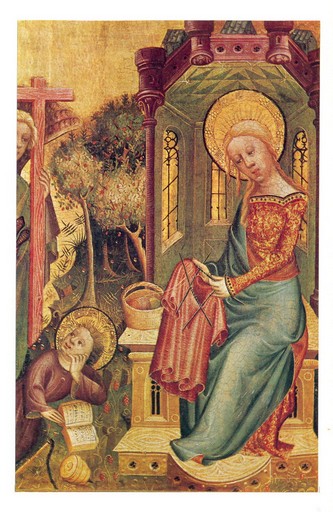 from the Buxtehude Altar

The Parisian Knitters Guild was founded, followed in later years by similar craft guilds in the Netherlands, Italy and other parts of France.

Knitting reached Britain and continued to develop in two streams – peasant knitting for family use and to make some income, and craftsman knitting of luxury items – most knitted items recovered from these times were worn by their wealthy owners when buried.

Also in the 16th century the knitting machine was invented. At first, hand knitters easily kept up with the clumsy but capital-intensive machines. Inevitably, over the next two centuries, the machines drove commercial hand knitting to the margins of society – evidenced in Britain by the economic contribution which hand-knitting continued to make in Yorkshire, Scotland and Wales into the early 20th century.

The Company of Framework Knitters was chartered in England by King Charles II.
The “need for speed” when trying to knit goods for sale, and the fact that poor people knitted while walking or standing, brought the knitting sheath into its own. Use of the sheath may have started centuries earlier, but during the 17th century, the sheath also moved into the hands and waistbands of wealthy and middleclass women, often with elaborate carved decoration and messages in wood, ivory or silver.
In Holland the earliest dated sheath is 1588, while some British sheaths are dated in the early 1600s.

What did knitting needles cost in those days ?
In 1728 Richard Latham, an English farmer and the father of a young family, noted in his account payments book that he paid one-half penny for a pair of knitting needles. This seems to be a pretty steady price, for he noted in 1735 that he paid one and a half pence for three pair of needles (“one pr stolen”). 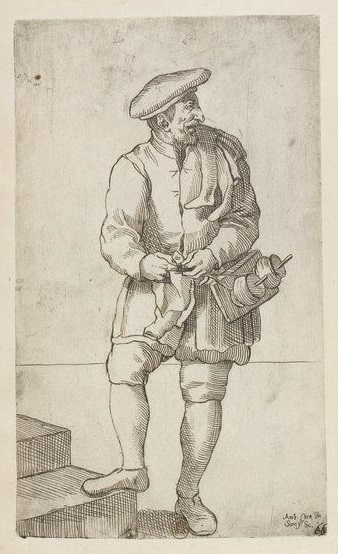 The Stocking Knitter by Annibale Carracci in the V&A Museum, London

A more urbanised middle-class developed in Britain, Europe and America. Fine needlework became a social occupation for such women. Knitting followed other needlework into very find coloured patters for hose, gloves, reticules, and covers of all types. Delicate silk yarns and bead knitting required very fine needles and also tip guards to hold stitches on the needles when not in use.
The earliest dated tip guards known to this author are hallmarked for 1791 in Holland. Knitted, beaded tip gurds reflect the beading fashion from about 1790-1820.

Light-cloured printes and muslins from the East contributed to a fashion for white knitting in cotton thread or yarn. Even finer needles were required – sometimes almost as fine as sewing needles. Knitters and needlewoman wore white gloves while at work to prevent sweaty palms from discolouring the white work.

Knitting recipes and patterns appeared. The earliest English booklet found so far is Knitting Teacher’s Assistant, first published in 1817 and reprinted regularly from the 1830s to the 1870s. 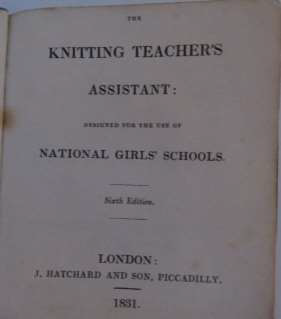 First branding on knitting needle gauges. Miss Lambert branded her ivory standard filiere with her name in 1842. In the same year Mrs. Cornelia Mee went a bit further includng her address as well as her name on her metal sizing disc. High-end haberdasher John Wilks at Wilks’s Cotton Warehouse in Regent Street put his name on his cardboard gauge in its figured cardboard slipcase.

During Victorian times, middle-class women had access to bone, whalebone and tortoiseshell knitting needles. None of these could match the fine gauge of steel “wires”. Poor women continued to use wire needles and continued to knit as fast as possible.

For some projects, UK pattern books now urged knitters to select needles with knobs or stoppers on one end – obviously, this great innovation was still so new in Britain that it rated a special mention.

Knitting needles with knobs or stoppers actually were in use on the Continent a few decades earlier. 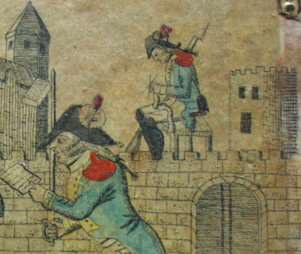 This image is a detail from a needle book printed around 1820 on silk and cardboard by coloured copperplate engraving. Note that the knitting soldier, sitting at ease on a fortress wall, is using only two knobbed needles, rather than four. This is one of the earliest images of the use of knobbed needles.

W. Carter’s The Royal Victoria Knitting Book recommended Walkers needles, Imperial size 22, and Manlove’s crochet thread for Pattern 80 for a baby’s cap. This is the earliest reference to a brand of knitting needles. Imperial size 22 is approximately metric size .25.

Novelty Rubber Co in the USA sold hard rubber (vulcanite) knitting needles – the earliest chemically made needles I have been able to trace. These needles were stamped on the stopper N.R.Co Goodyear PG 1851 (a reference to use of Charles Goodyear’s 1851 patent for vulcanising rubber). Novelty Rubber stopped reference to this patent when the patent went out of force in 1871.

Other chemically created and moulded products soon followed – celluloid in the 1870s, casein in 1890, Bakelite in 1909, etc. 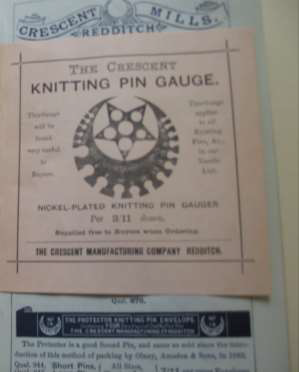 From this time on, marketing of inter-related, branded tools increased in pattern books and booklets and in newspapers.

In addition to paper packaging, unbranded double-pointed needles were sold in press metal tins, wooden tubes and metal clasps. Some varieties of this packaging carried brand names on labels or stamped onto the outers. Starting dates for these packagings are unestablished.

Luxury knitting tools moved from Europe to the USA. Silver tip guards and yarn holders – common among the upper middle classes and aristocracy in Europe (not in Britain where knitting retained the taint of the lower social orders) were followed up in the US with silver knitting needles, yarn holders, point protectors and other luxury needlework items. Silver was a relatively inexpensive metal in the US at this time due to silver “strikes” and “silver rushes”, and silver tools were sold in the catalogues of mail order jewellers like Baird-North and Daniel Lowe.

Jarrett, Rainsford and Laughton Ltd in Britain and Australia stamped their metal single-point needles with the brand name Stratnoid and advertised this brand in periodicals and press. Many other metal needles were branded from this time.

Manufacture of knitting needles transferred over two to three decades from Britain, Europe and North America to to Asia. Knitting acquired a rather daggy, “homebody” image.

Everything old is new again !!