Last year Christina Bertrand wrote about her fish-shaped coin-silver knitting sheath and its intriguing provenance with the name and birth date of an early owner, born 1827.   It is 2 ½ inches long, with engraved details and a tube soldered to the back to hold the knitting needle end, and it is affixed to a heart-shaped pad by stitches through a ring at the tail and loops wound around the top of the tube (see TCI Bulletin, Spring, 2010, p 18).  The pad could then be stitched or pinned to clothing or apron.

Knitting sheaths seem to be the most widely and ardently collected tools from the old-time knitter’s kit.  They are well known to English-language collectors from the British (mainly) wooden sheaths and from the Dutch sheaths made from a variety of materials but mostly wood, bone, and silver.  The majority of  wooden knitting sheaths are folk craft items, as handknitting for personal and commercial purposes continued in non-metropolitan areas up to the early 1900s.  However, others, including the silver and ivory,  were made by commercial craftsmen.

Every book on needlework tools has a photo or two of knitting sheaths – Kay Sullivan’s 2004 book[1] has wonderful  information and photos about Dutch sheaths.  Also excellent reading about UK sheaths is Peter Brears’ 1982 article which has extensive topographical research.[2]  But most other books do not have much historical information, or many useful dating tips.

Figure 1 – British and European knitting needle holders :  Figure 1a, l to r, from Scotland a belted whisk, from England a scroll-ended windowed sheath, from Holland sheaths made from a curved twig, a nail-studded tree bole, and a carved leather cone.  Figure 1b, l to r, sliver sheaths to hold thinner needles from Germany (?), Spain, France, and Holland.    In Figure 1b, the left-hand stick sheath would be inserted under the waistband; second from the left has a clip on the back to hook over the waistband and rings to attach seven pendant chains in addition to the knitting sheath vertical on the front; the two right hand sheaths have pins to attach to the waistband or blouse. 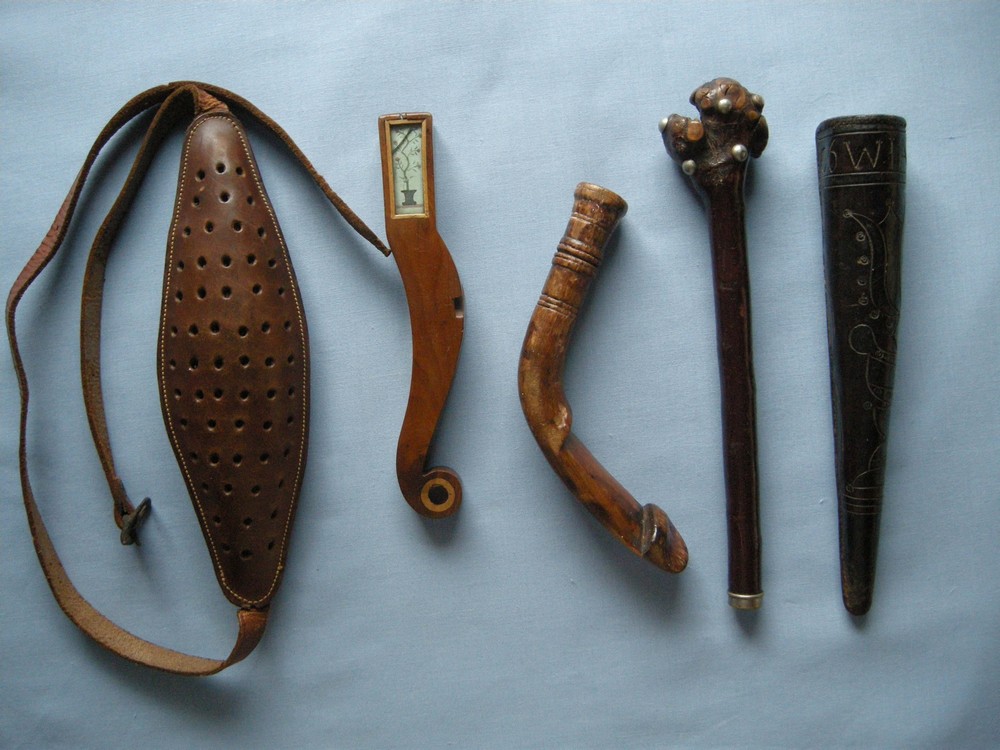 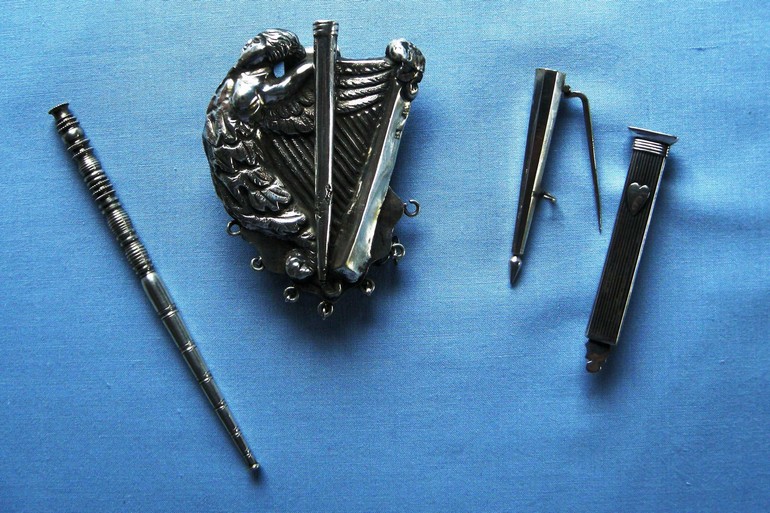 from the author’s collection

Many sheaths have been collected into the United States, but I have never found any of the larger wooden or silver sheaths about which I felt confident of a US origin.  Whalebone knitting sheaths and the small silver sheaths were definitely made in the US; and Shaker stores might have sold small, wooden sheaths.[3]  .

But, in addition to the coin-silver sheaths –  which do have relatives in Europe – there is another type of knitting sheath that seems unique to the United States.   This is the knitting sheath made of worked fabric.  Sometimes utilitarian, sometimes elaborately extravagant, these trifles reflect the late 18th and 19th century fashion for knitting on very fine needles, to create silk or cotton or linen gloves, edgings, stockings, baby clothes, and other small items.  Being made of fabric, they do not have the rigidity of wood, metal, or even leather sheaths, so they could only hold fine-diameter needles.

from the author’s collection

The four cloth sheaths in Figure 2 are the only ones I had seen in 15 years of collecting – until recently.  The top left-hand sheath is a utilitarian heart made from machine-embroidered fabric with a carefully gathered cloth edging stitched in place and the pointed end of a quill affixed to the back by stitching across it many times.  The quill is then decorated with a cut-fringe edge.

Bottom left is another, slightly dressier, heart-shaped sheath with a contrasting fabric edging stitched on, a quill needle holder in the centre, and embroidered flowers at the bottom.  This was advertised as a Shaker item, but my Shaker-expert friends say probably not.[4]

The middle sheath came from the collection of Eileen Schwall and was purchased by her in the late 1960’s from a New England antique store.   Although it is now in rather poor condition, it is actually quite elaborate, having a small tin tube with flattened bottom and a  piecrust lip stitched to the black velvet backing.  The diamond-shaped pad has a silk ribbon edging, now mainly perished, and a separate hessian backing.   This type of  item was so little known in the mid-twentieth century that Mrs Schwall discussed the sheath with Anne MacDonald, the author of No Idle Hands.[5]  They turned up a  November, 1848, reference from the popular US magazine, Godey’s Lady’s Book, which said :  “a knitting sheath, &c, to be fastened on the waist of the knitter, toward the right hand, for the purpose of keeping the needle in a steady and proper position.”

The right-hand sheath is beautifully embroidered with flowers and a blanket stitch edging.  It was de-accessioned from a Massachusetts museum, and still has the name of the donor on the attached card which I have not removed.  Also still attached is the donor’s other gift, a small square whalebone sheath  with fretwork edges and a needle tube on the reverse  made by carving down the original thickness of the whalebone.    Oh well – the museum’s loss is my gain – and at least I know how to appreciate these lovely items.

But another recent find may indicate that this type of needlework knitting sheath was more widely used than suggested by four finds in 15 years.  While toiling with my favourite search engine, I came up with a listing from a 1905 Museum of the Confederacy catalogue, held at that time in the New York Public Library Reference Department.  The 1905 catalogue read :  “Knitting Sheath made by Mrs. Jefferson Davis for Mrs. Ann Grant to decorate a Christmas tree, which proved to be the last Christmas of the Confederacy.  Mrs. Davis wrote a charming story of Christmas in the Confederate White House for a New York paper December 13, 1896.  Presented by Mrs. Ann Grant.”

What a find!  I quickly emailed the Museum of the Confederacy in Richmond, Virginia, and enquired if they might – 105 years later – still have this item.  I enclosed the Figure 2  photo to illustrate what I was talking about in case the staff couldn’t interpret my query.

And what a relief!  The museum easily recognised the cataloguing reference and did have the item.  Curator  Cathy Wright noted, “I was delighted to receive your message, as the sheath to which you refer has been among my favorite objects. It has been popularly known around here as “the Christmas ornament,” as it is one of the rare items in our collection associated with that holiday. Far fewer people realize the “ornament” actually had a useful purpose.”

Figure 3 – front and back of the Butterfly Sheath or “Christmas Ornament” created by Mrs Jefferson Davis, wife of the Confederate president. 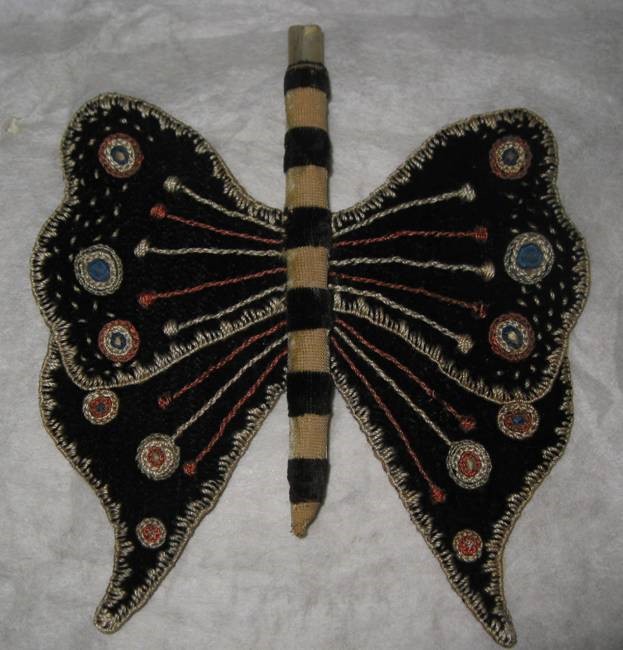 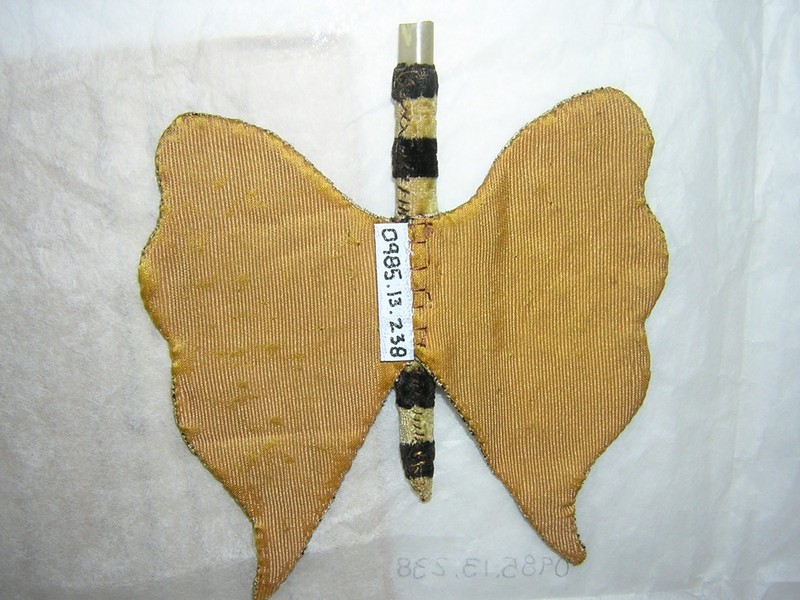 photo courtesy the Museum of the Confederacy

As can be seen in the photographs, the sheath is more elaborate than the others, perhaps reflecting the higher social and economic status of the Davis family.  The front of the sheath is black velvet with blanket stitch edges and red, white, and blue embroidery veins and dots.  The back is a serviceable fabric; and the quill needle holder is held to the front with alternating bands of the two fabrics glued on to give the quill a “body” appearance.  The width of this sheath is five inches wing tip to wing tip, making it quite a large item to pin on the clothing.  So, perhaps, it really was an ornament – another of those needlework tools too good to use.

As I noted above, I have never found this type of cloth needlework knitting sheath outside the United States.  I have seen sheaths made of many other materials besides those shown here, including amber, copper, steel, tin, bone, porcelain, glass, and horn –  but never, outside the US, a sheath made from needleworked cloth.   Speaking with my sheath-collecting colleagues around the world, I still have not been able to locate any other such items.  My UK expert did send me a photo of a needleworked fabric sheath held at the Winterthur![6]  I’ll have to check that one out too when I am next in the States.[7]  And, so, I feel fairly confident in stating that these sheaths are uniquely American.

But wait – there’s more !  The Museum of the Confederacy also has a silver fish, very similar to Christina’s.

Figure 4 – Silver fish knitting sheath at the Museum of the Confederacy. 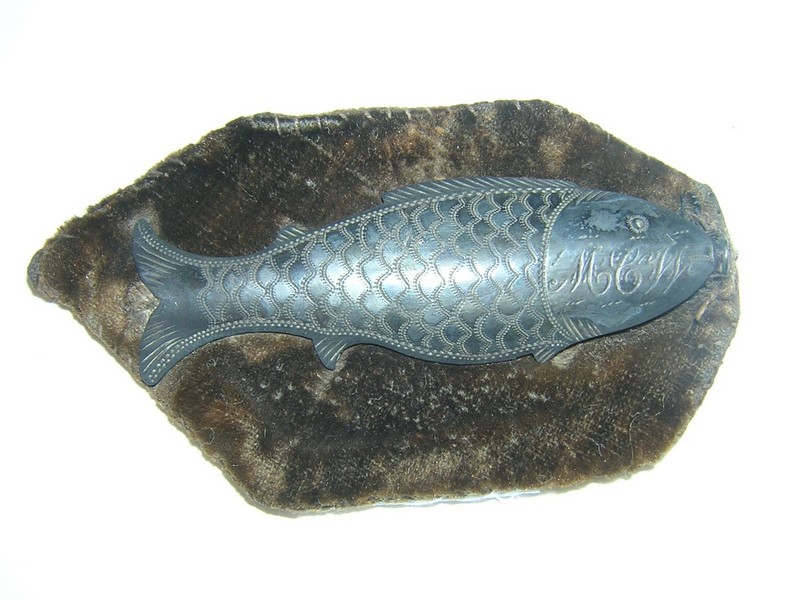 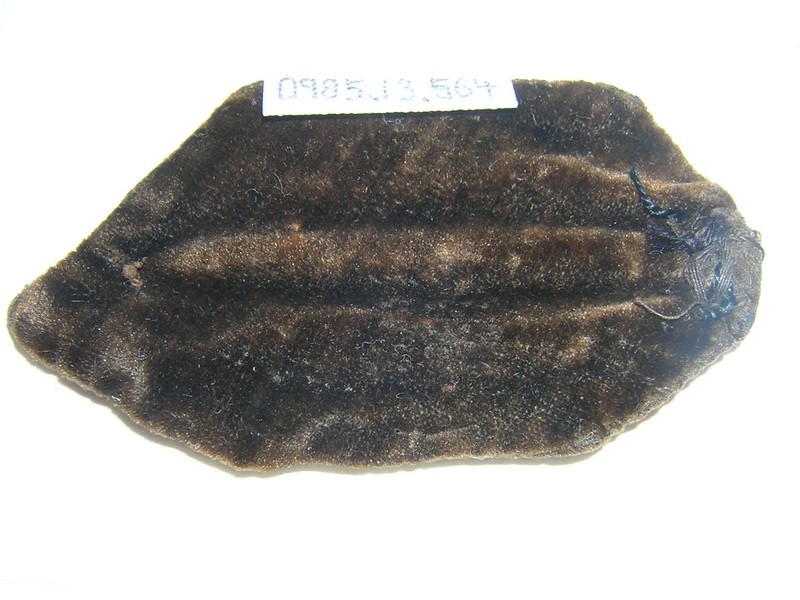 photo courtesy the Museum of the Confederacy

The Museum describes this item thus :  “This is a lop-sided brown velvet parallelogram with a silver fish on its face. The fish is engraved with the initials, “MCW.” [H]2.75″  [W]13″  [D]4″.   History: A knitting needle sheath or holder used by Mrs. Mary C. Woodward of Virginia.”

This sheath is so similar to that owned by Christina – same outline with pointy fins, curvy tail, engraved scales and eye, that one is tempted to suggest they both come from the same smith.   Am I being presumptuous ?

The Museum of the Confederacy has many other needlework items in its collection.  Cathy Wright noted needlebooks, huswifs and thimbles, and  said the museum would be pleased to host special purpose or research visits.  Address is 1201 E Clay Street, Richmond, Virginia 23219.  More information is available from the museum’s website  www.moc.org

As for the variety and origins of the small silver sheaths – well, that’s another article.

[4] Provenance of Shaker knitting sheaths is not yet solid; further research is being undertaken now – it is acknowledged that Shaker items are so sought-after now that items of similar age or workmanship sometimes slide under the banner of the popular sect.

[7] Christina Bertrand has also turned up a museum , Old Sturbridge in Massachusetts, which has at least four needleworked cloth sheaths.  See   www.osv.org/explore_learn/document_viewer.php?Action=View&DocID=995

for on-line photographs of this museum’s sheaths.