The final presentation at the October conference of the Needlework Tool Collectors Society of Australia was on Australian Measures, which covered mainly knitting pin gauges and various rulers.  One unique item was a World War II Red Cross gauge, presumably made and sold as a fund-raiser in South Australia.  Our speaker mentioned that it was the only Australian wartime gauge that she had found.

Figure 1 – World War II Red Cross knitting pin gauge and recorder, assumed to have been made and sold in South Australia.  This is the only example we have seen published.

Now, another Australian wartime gauge has appeared, presumably made in Victoria, and with an intriguing story that can be inferred from its companion items.

In November a bundle was turned into a local op shop in a middle-inner suburb of Melbourne.  The various items dated to the 1940s and included two knitting pin gauges – so it seemed to be the contents of a sewing basket that that been stored in an attic or back cupboard for many years.

The bundle was purchased by a member of the Needlework Tool Collectors.  So the contents were saved, and now they are treasures among the Australian gauge collection.

The first gauge, the gold Keepair – see Figure 2 –  was a commercial manufacture at some time in the 1930s or  ‘40s.  Although we have not been able to date this gauge more closely, we can assign it to a retailer, the well-known firm of J.G. Coles.  During the time period we are talking about Coles operated variety stores, having been founded in 1914 in Smith Street, Collingwood, one of Melbourne’s most iconic working-class suburbs.   During this period and a bit later, Coles used a number of brand names for knitting pins and other haberdashery, including Embassy, Keepair, and Daintree. 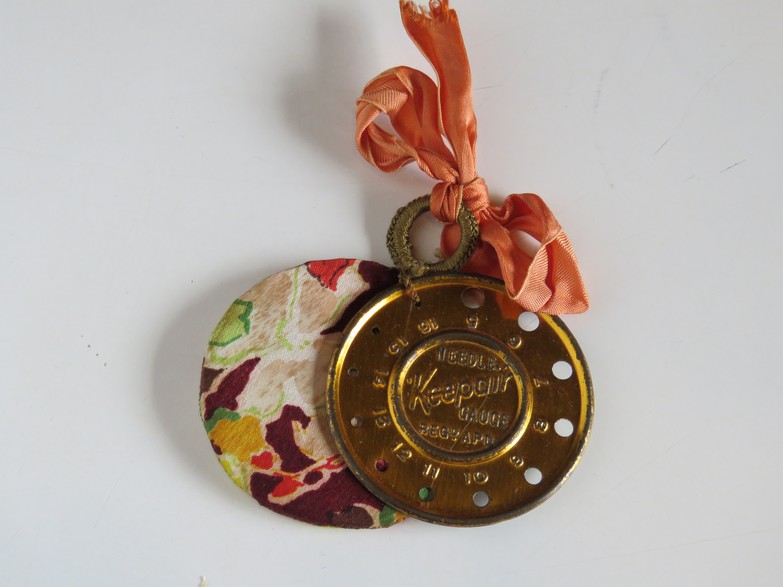 The tin gauge appeared in several forms – see Figure 3 –  including an unbranded version. These round tin gauges were the ends of a tube of balls of knitting yarn; this would have been an up-market merchandising presentation.  A knitter would buy the tube of yarn balls and then use the gauge included as a merchandising bonus.  My zealous searching over nearly 20 years has not turned up such a tube, but we do have Needlework Tool Collectors members who have seen this tubular packaging. 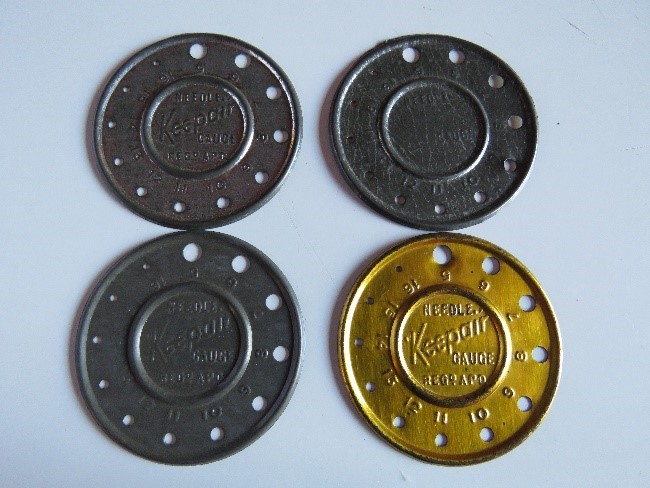 Figure 3 – examples of the tin Keepair gauge, including an unbranded example, upper right, and the gold anodised example, lower right.

Our Keepair gauge – Figure 2 – was a gently used tool, not showing a lot of wear on the anodised gold side, and personalised by attaching a “keep” to help the gauge stand out in the workbasket or among items on a worktable.  This keep appears to be a thick cardboard rondel, cut by using the gauge itself as the pattern, and then covered in two round scraps of colourful printed silk dress fabric.  The keep was attached via a tiny  cord, crocheted in brown floss,  to a stronger ring, also covered by crochet or tatting and the whole finished with a salmon pink ribbon tied in a bow.  The pink ribbon picks up colours in the dress fabric. The colour on the dress fabric and the ribbon has not faded, indicating that the set has been stored out of daylight.

The two pieces making up the fabric-covered rondel have been stitched around the circumference with regular, tiny stitches, not quite 19th century quality but very unobtrusive.  Together the gauge, the keep, and the decorative bow give the impression of a woman who loved needlework and handcraft.  The gauge and keep are a continuation of the Victorian practice of needlewomen making small keepsakes and gifts from their own handiwork.

More importantly for our knowledge, a second gauge accompanied the Keepair – Figure 5 – bare aluminium and from the look of it, cut to shape by hand and hand punched.  The sizing holes are numbered to match the Keepair dimensions, with the numbers presumably stamped from a reference pattern. 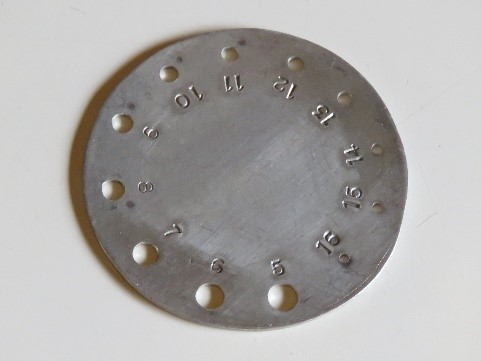 The story this gauge conveys is that our Keepair gauge owner joined a knitting circle when World War II began.  The Red Cross and other community groups and local citizens formed these groups to assist the war effort and provide “comforts” for military personnel.  Output from these groups is well documented, and hundreds of thousands of knitted socks, gloves, mufflers and other items – as well as sewn garments and many, many other items – were transported overseas to the European and Asian theatres of war.

In these knitting circles, the Red Cross provided instructions and materials, attempting to standardise outputs, so that they could be more easily matched to their new owners.  Most of the wartime gauges were cardboard like the South Australian gauge in Figure 1, and featured only a small number of sizing holes because the “comforts” would be created in only a limited size range from specific yarns and knitting needle sizes – sort of, on the KISS principal – keep it simple, silly.

The Keepair gauge has a few more holes than most wartime gauges.  Our South Australian gauge in Figure 1 has 9 sizing holes – Imperial size 5 to 13; overseas wartime gauges had as few as three.  The Keepair has 12 sizing holes, Imperial size 5 to 16 – more than a wartime knitters circle would use, but the circle knitters could just ignore unwanted sizings.

Many knitting circles grew rapidly and included those learning to knit specifically to help the war effort.  These “newbies” needed a lot of tuition and knitting aids would be in high demand.  Our Keepair gauge owner seems to have been an accomplished needlewoman, and would possibly have had to take on a teaching or demonstration role.

Because the Keepair gauge was a personal item, I think the owner’s husband or some other male relative or friend used it as a pattern to produce copies, one of which was kept with the original Keepair.  The maker probably worked as a fabricator; aluminium (developed at the end of World War One) was still a new product, costly and carefully accounted for in wartime.  But the little aluminium knitting pin gauges could be manufactured from scraps and offcuts.

Then, the aluminium gauges could be shared among the knitting circle, taken home if needed, and returned when the knitter had finished.  If they were lost, their value was minimal.  Probably several were made for the one knitting group.  The gauge itself is a fairly crude item, its uneven edge indicating that it was cut out by hand.

At war’s end, as the knitting and sewing circles disbanded, the cheap and cheerful aluminium gauges slipped from sight.  Perhaps the gauge kept with the original Keepair is the only one left, but it is a glimpse of Australia’s needlewomen during a period of national crisis and of the “make do” spirit of Australian wartime efforts.